Originally published in Industrial Prime in 03/2017

The shift from scheduled check-ups to proactive maintenance

Automation is taking industrial production to great new heights, while maintenance has evolved into much more than scheduled check-ups and remote support. Fastems’ maintenance business is growing faster than ever. Growth is driven by major contracts of which our MTU partnership is a prime example.

Industrial automation systems supplied by Fastems are typically tailor-made and come with a very long life span: many of the systems can be used for decades. In most cases, the work doesn’t end once the system has been delivered. On the contrary, Fastems and its customer will usually continue working together to further develop the investment and the customer’s process. 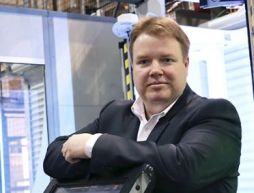 Thanks to this work, a system may remain on the cutting edge for decades to come.

“The true value for our customer does not lie in the ownership of the system itself, but rather in what can be done with it and for how long,” says Fastems Sales Director Esa Karppi.

According to Karppi, maintenance agreements are changing. They used to be characterized by scheduled maintenance and remote support, mostly focusing on problems disrupting production in the here and now.

“It was quite typical that the customer would only remember maintenance in the occurrence of an actual technical issue,” Karppi points out.

These days, however, customers are much more aware of the benefits brought by proactive maintenance and the optimization of systems over time. They want to know in advance what their system is capable of and what kinds of investments it is going to require in the future.

In recent years, Fastems has been forming a growing number of partnerships based on a concept the company refers to as Care Management.

While still covering traditional services such as scheduled maintenance and technical support, the new concept comes with a strengthened focus on the long-term operation of the customer’s assets.

“Production needs are changing rapidly, while the development of technology is making it possible to create systems that are more intelligent, versatile, and efficient. Meanwhile, maintenance is also becoming increasingly software-centred rather than focusing on the hardware.”

According to Karppi, it is not uncommon that once an automation system is installed, major changes may become needed as soon as in five years’ time. With automation system upgrades, Fastems makes sure its customer’s solution will remain competitive in the future as well.

“Naturally, we take such needs into account by building the system in a way that if necessary, even major changes and improvements can be made to it.”

With customers across the world, Fastems’ maintenance duties are primarily performed locally by the company’s own people. Fastems has its biggest maintenance and service organizations in Germany and the US, currently its main markets, while the presence is also strong in the UK, Scandinavia, Italy, China, and of course its native Finland.

Biggest Maintenance Deal of All Time

In April of 2016, Fastems signed a major service agreement with MTU Aero Engines. The agreement concerns Fastems’s Multi-Level System (MLS), a software-heavy solution forming the bridge between the machining process and the manufacturing control system at MTU’s new production facility in their headquarters in Munich, Germany.

As Industrial PRIME has written before, the MLS delivery was one of the most challenging projects in Fastems’s history.

With the maintenance agreement, Fastems signed up for further challenges, as it is now Fastems’ job to support the fluent operation of the system and to guarantee that the whole works as it should. “It is hard to find an industry that could be more demanding than Aerospace” confirms Karppi. “For a company such as MTU, standardization of production process is a crucial factor, requiring cutting-edge technology whose absolute reliability have to be guaranteed.”

“Further challenges are brought into the picture by requirements related to the constant availability, traceability and documentation of parts and components for airplanes that, just like our systems, sometimes are in service for several decades.”

As one might expect, the agreement with MTU is a promising breakthrough for Fastems. There might be more coming, as the company has plenty of other customers in the aviation industry as well.

“It should be safe to assume that this success with our new maintenance service concept will help us win further similar agreements in the future,” says Karppi.

In the meantime, it sounds like Fastems is going to have plenty of work to do. Maintenance and life cycle services now constitute approximately 25% of the company’s total turnover, and the share is increasing steadily.

Striking Improvements Through the QMS Renewal

In 2019, Fastems started a strategic project around updating its Quality Management System (QMS). “Blah”, you might think, but this is so much more than a Quality Management System with process charts. The QMS Renewal was a much needed next step to follow our cultural revolution, which took place some years ago. Comprising of the Fastems culture was a joint effort where every Fastemsian participated and was made heard.

In this blog post, we sum up the five most typical misconceptions we face, breaking them down to understandable pieces and explaining how we’ve busted them.

Growth brings us great opportunities and more often than not it also means we’re moving forward fast. Even though growth means busy days, it’s important to stop for a second and re-evaluate the situation. Is there something we could be doing differently? How can we ensure that we keep improving as we grow? At Fastems, […]