Had to empty half of the hall

Man Diesel & Turbo in Copenhagen has taken the next step in the quest for optimized production of valve housings and more. Two fully automated full five-axis milling installations are now installed on a floor area with room for two smaller houses. 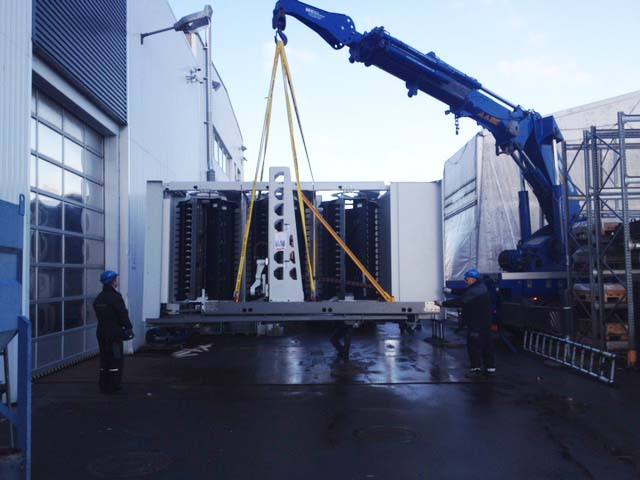 The employees had to help clear a large part of the site, as the two small house large installations were to be installed which occurred respectively in December 2015 and in June 2016. The hall crane system was not strong enough, so the 30-ton machines had to be towed into the space.

Two 30 tons, full five-axis CNC machining centers from the German machine tool manufacturer Heckert, which today is part of the Swiss Starrag Group, combined and integrated with two Flexible Pallet Container lines. FPC1500 from Finnish Fastems now tower about five meters into the air in the production halls at Man Diesel & Turbo at Teglholmen in Copenhagen.

The company began two and a half years ago to look for an optimized solution for the milling department in the machining production, which today consists of total about 120 machines where-by up to 100 are CNC-controlled.

On the CNC milling side, the number of machines are currently five – supplemented by a number of multi-machining centers – but they are in turn massively present in the area of ​​production which no longer manufactures the major machine components for the huge two-stroke ship engines, which for more than one-hundred years has been, and still is the company’s overall specialty.

“We are in fierce competition with our licensees around the world. They can produce the same items that we can, so we must constantly be on our toes in terms of productivity,” says Manager Investment Projects Ronnie Olsen, and continues: “After this latest investment round on the milling side we certainly have a good foundation for the future in order to produce the bigger items smarter and since the number of up-voltages can be significantly reduced and we can utilize the FPC system to keep the machine running without stopping for a long time when we really get rolling.”

That the two Heckert 630 X5 Machining Centers are full five-axis is not least a result of the company’s design department, which is headquartered in Copenhagen, and develops an increased number of more complex parts with oblique holes and other special geometric features.

And that the fifth axis is based on the work table’s location in a particularly stable cradle design, has been a deciding factor in the decision that the German-produced machines have been chosen as the result of a longer elimination process with a number of competing CNC-machine manufacturers, says Ronnie Olsen.

Moreover, he emphasizes the features which milling machines output power in kilowatts and opportunity for 10,000 rpm, one rapid traverse of 65 meters per minute and positioning accuracy in all linear axes of six my meters as well as the opportunity for 270 places for tools in the tool magazine with seven seconds chip-to-chip-time.

“It is difficult to determine how many tools should fit in the tool magazine. You could say it is a balance of what is actually needed. In fact, we have already filled all the spots on one machine, but anyway we are pleased with the number, “says Production Engineer Per Osborn Andersen.

Whereas the company was well acquainted with Heckerts CNC- machines that have been in the plant since 2002, when Lars Lynge, who today is the director of Hermle Nordic, introduced the machine, the selected automation solution from Fastems is a new acquaintance. The Copenhagen division has however been assisted in the implementation phase by a French sister company, which has already implemented a Heckert-/Fastems solution. The employees have also been trained to be familiar with the FPC system that offers ten 630×630 millimetre pallets and the manufacturer is highlighted as a Plug-and-Play FMS solution.

“There have been a few adjustments of the two systems, we have chosen to implement. Including that the electricity supply and emergency stop are now completely synchronized between the pallet system and machining centers. This is due to the fact that we have only one machine connected to each FPC-System. And we have through the supplied remote service function been able to solve various minor challenges, “says Maintenance Manager Jesper Ladegaard. He adds: “So, when we look back at the whole process, we can describe the implementation as a form of Plug-and-play experience.”

At the factory at Teglholmen there are currently 300 employees working, and totally there are about 2,100 employees at MAN Diesel & Turbo in Denmark (which also has branches in Frederikshavn and Holeby). A large proportion of these are office workers, engaged in the development of the manufacturer’s future marine engine technologies.

To get the project to work as a higher unity was very much a team effort, says Ronnie Olsen (right), here seen in dialogue with Henrik Brodén from Fastems. Behind them seen MAN Diesel employees Per Osborn Andersen, Rene Fussing and Jesper Ladegaard.