A flexible manufacturing system helps an Indiana job shop run a high mix of aerospace work for long stretches of time and function more like a contract shop. 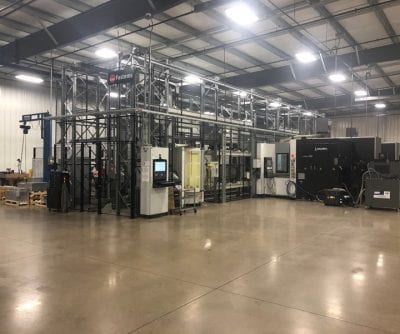 This four-machine FMS gives CNC Industries the scheduling flexibility to enable just-in-time delivery of parts to its aerospace customers.

For much of its 25-year history, CNC Industries functioned as a job shop serving various end markets, although it had some contracts with a few aerospace customers. In fact, the Ft. Wayne, Indiana, shop appreciated the aerospace work.

“We liked the complexity of those parts and felt taking on more of that would further help us differentiate our business from others,” says CFO Steven Deam, Jr. “So, in 2009, we mapped out a multi-year plan to make a bigger push into aerospace, which included achieving AS9100 certification, realizing that building relationships with new customers in that industry would take some time.” 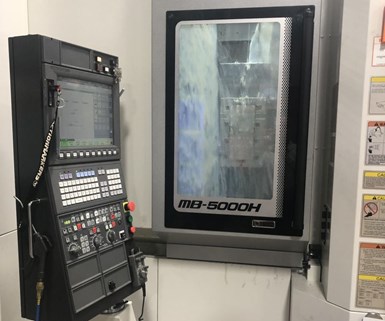 CNC Industries won additional aerospace work in the years that followed. In 2016, it scored a major contract for 28 discrete part numbers with a total volume of approximately 1,000 parts. At that time, the shop’s CNC milling capacity included numerous stand-alone VMCs and one HMC. “We knew it’d be challenging to effectively process the high mix of intricate parts that had long setup times with our existing equipment,” Mr. Deam says. “That’s when we considered adding HMCs linked to a flexible manufacturing system with multiple pallet storage stations.”

This would enable many jobs to be set up on pallets offline that would then be parked in stations to await their turn to be automatically shuttled into machines as scheduled. Not only would this maximize spindle uptime, but it also would give the shop scheduling flexibility for just-in-time delivery to its customers.

The selection process for the HMCs and flexible manufacturing system (FMS) took CNC Industries six months. “We were able to consider a number of machine alternatives because they would be dedicated to running aluminum, not titanium or high-nickel-content metals,” Mr. Deam explains.

“Ultimately, we chose the Okuma MB-5000H HMC platform with high-pressure coolant and mist control integrated into a Fastems FMS, as suggested by Gosiger in Indianapolis, which has been our trusted equipment supplier for years.” 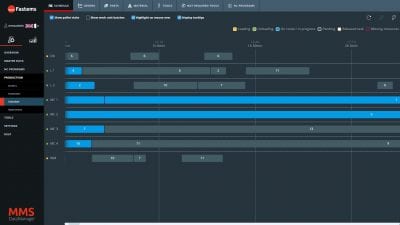 Job scheduling is performed using the Fastems Manufacturing Management Software (MMS) system. Part programs are also saved in the MMS and delivered to a machine’s control when a new job is loaded.

Fastems’ systems can be configured in a number of ways. Based on estimated capacity needs, CNC Industries decided that an FMS with four HMCs and 60 pallet storage stations would be sufficient (for the time being, anyway). With this layout, a pallet loader rides along a central rail with pallet storage stations and a pair of HMCs down either side. Two pallet storage levels accommodate 60 stations while minimizing the system’s footprint. Two more HMCs can be added to one end of the FMS, should the shop choose to do so. The other end features a pallet loader on one side of the rail and unloader with a crane opposite that. 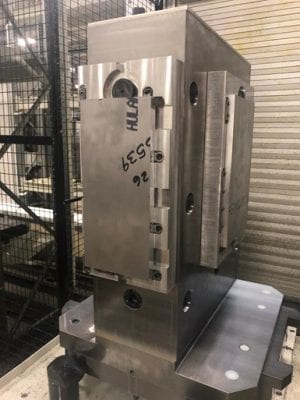 The FMS unload station features an arm that enable pallets to be rotated 360 degrees so operators can access all sides of a tombstone.

The first of the initial pair of HMCs was delivered and laser-leveled by Gosiger in January 2017 while the Fastems FMS was being designed and built. CNC Industries began building tombstone fixturing and purchasing tooling to enable that first HMC to start production. The shop ran it as a standalone unit until the FMS and second HMC were installed as a cell later in September. Once the second HMC and the FMS were operational, the shop began transferring jobs from the first HMC to the second, and the first was added to the FMS. That way, there was no loss of production time. The second pair of HMCs was installed the following year.

Because the FMS is primarily running repeat jobs, each pallet is dedicated to one part. This represents a change from a job-shop mindset to one of a contract shop. CNC Industries designs and builds some tombstone fixtures for the pallets in house, but will outsource that work to outside vendors at times. “It is nice to have control over the fixture-building process, but considering the value of our available machine and engineering time, it sometimes makes more sense to have another company make them,” Mr. Deam says.

Not only does the FMS maximize spindle uptime, but it also gives the shop scheduling flexibility.

Job scheduling is performed using the Fastems Manufacturing Management Software (MMS) system. Part programs are stored in this system, too, instead of in individual machine controls. Each time a new job/pallet is delivered to a machine, the MMS loads the part program into the machine’s CNC. It deletes the program from the CNC once the job is completed. Tool offsets are measured using a Zoller presetter, which was purchased at the time the FMS was added. A macro is used to pull offset data from new tools added to a machine and input into the part program. This eliminates the need to hard-code offsets. 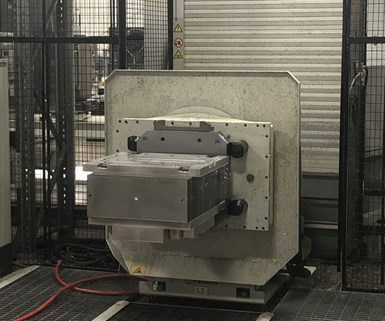 The unloader arm can tilt down 90 degrees so that heavy blanks can be lowered by crane onto a tombstone face.

The FMS HMCs have tool-breakage probes and spindle touch probes, but the touch probes are used only to measure select part features for process control. The shop feels time machining parts is more valuable than time measuring them.

Part loading and unloading are handled differently than originally planned. Although the FMS has a dedicated loading station, the shop rarely uses it. In most cases, loading and unloading are performed at the unloading station. “Because most jobs that run through the FMS repeat, our operator removes completed parts from the tombstone and immediately loads new material blanks,” Mr. Deam explains. “We rarely send an empty tombstone back to a storage station.”

The unload station features an arm onto which pallets are lowered and secured via zero-point clamping. Pallets can be rotated 360 degrees so operators can access all sides of a tombstone. In addition, the arm can tilt down 90 degrees so that heavy blanks can be lowered by crane onto a tombstone face. This eliminates the need for the operator to push them laterally toward the tombstone for clamping. Part loading and unloading are the FMS operator’s primary tasks, and a priority board near the unloading station lists upcoming jobs. 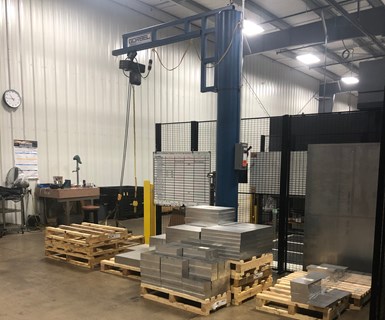 Part loading and unloading are the FMS operator’s primary tasks. A priority board near the unloading station lists upcoming jobs.

The goal is to have the cell run 24/7, but CNC Industries has yet to fill all of the four machines’ available capacity. It currently has jobs devoted to 25 pallets, but continues to build fixturing for additional jobs. “We’re essentially running 24/5 at this point with our two shifts,” Mr. Deam says. The shop is working to identify jobs currently running on its standalone machines that justify the time and cost to create the fixturing and part programs to run through the FMS. Jobs that typically repeat, have high batch sizes and long cycle times are ideal, as are those that require machining on all six sides. Leadership is also considering adding a CMM near the FMS to make it more convenient for FMS operators to inspect parts.

CNC Industries commonly deploys its manufacturing engineers to open bottlenecks in specific departments. For example, this water recirculation system for a deburring process cleans the water coming out of part tumblers before sending it back to the tumblers. This has reduced time spent removing tumbling residue by more than 50 hours. 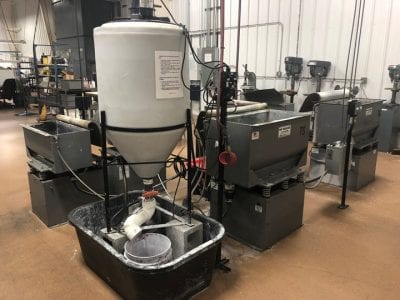 water recirculation system for a deburring process cleans the water coming out of part tumblers before sending it back to the tumblers.