It was possibly one of the most ambitious automation projects at ALLMATIC-Jakob Spannsysteme so far, something that was probably unheard-of and unique, namely creating a robot cell for handling pallets and workpieces. Among other things, one of the particularly challenging aspects was the desire for the setup-change of a machine to be automated in order to run the production around the clock.

ALLMATIC-Jakob Spannsysteme GmbH develops and manufactures machine vices, from high-pressure vices for conventional milling machines to complex solutions for flexible production centres. Additionally, they come up with purpose-built solutions for special requirements. According to Operations Manager Herbert Mayr, ALLMATIC-Jakob Spannsysteme is among the leading suppliers in their field. However, the company does not aim to sell the more vices than its competitors to become the market leader.

Mayr states, “Rather, we are striving to be the technology leader in our segment by 2030. In the best interest of our customers, we need to continuously develop innovative products, add more intelligent solutions and, above all, intensely focus on automation. In that regard, one of our most ambitious projects was the development and realization of a robot cell that is automated to make up to 32 different components for vices in individual batches of more than 100 units per order around the clock. That doesn’t just combine the handling of pallets and workpieces within one system, but also the unattended setup changeover of the machine.”

Given such high aspirations, many operations managers of other machine manufacturers initially just shook their heads, says Mayr and adds, “That is until I met the Senior Sales Manager of Fastems, Thomas Weinhold, at an in-house exhibition of Gebr. Heller Maschinenfabrik . His very specific questions made me realize I had come across someone who truly understood what I was planning. To make a long story short: Together with Fastems and Heller as a machine supplier and general contractor for the project, we were able to actually implement the idea for a robot cell.” 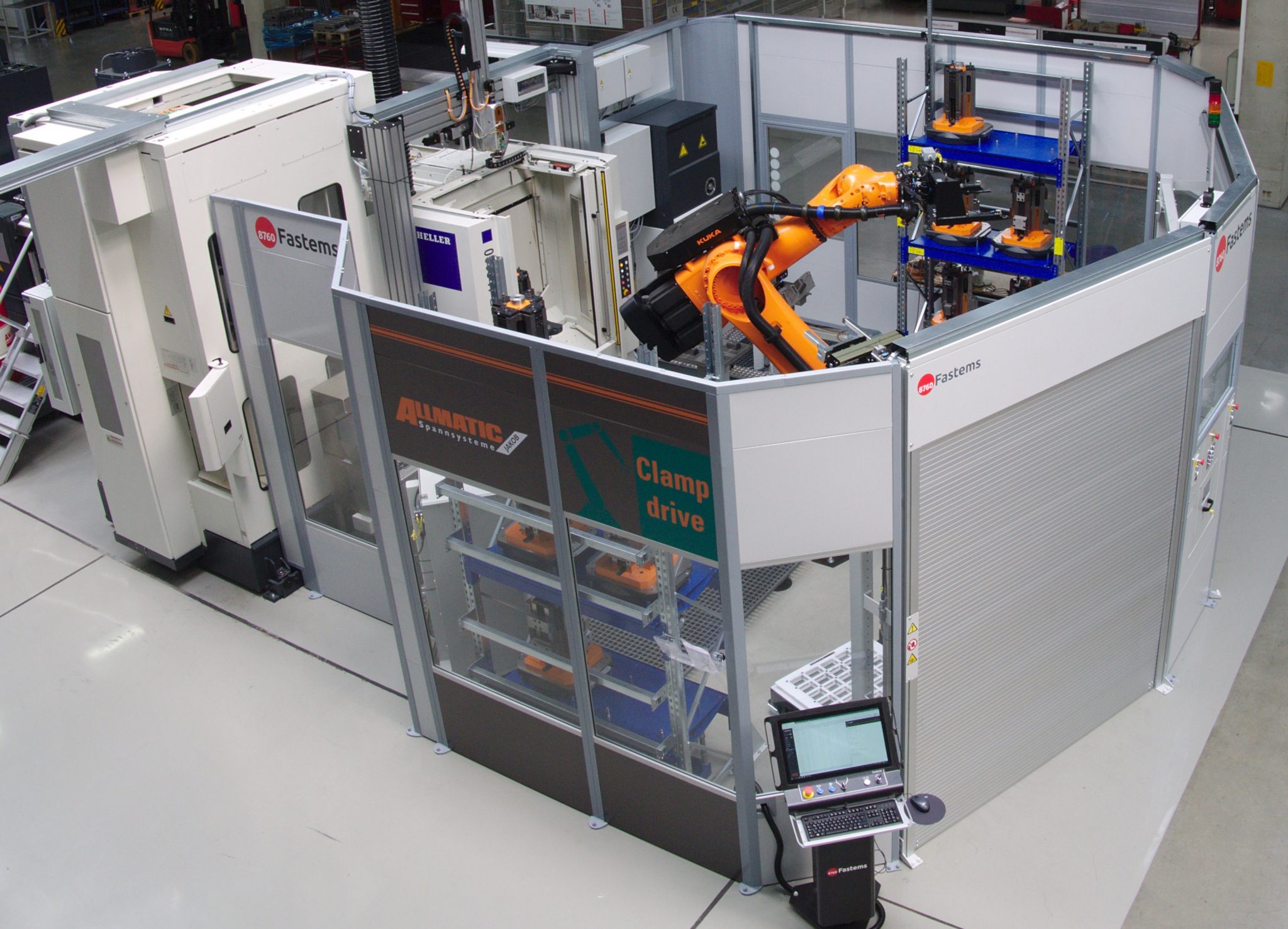 This robot cell, which ALLMATIC has used since 2018, is unique and has several special features.

Start of Production via Barcode 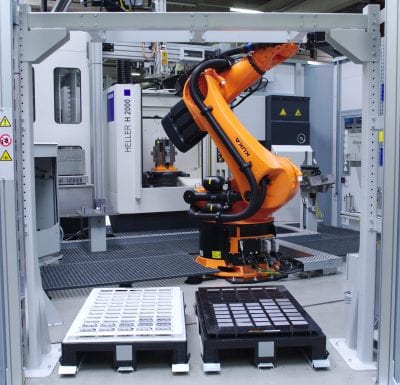 One of the two material stations, each for 2 plastic euro pallets for raw and finished workpieces.

The individual components of the robot cell (see box: Agile robot cell) and particularly, the description of the typical production process, shed some light on what makes this automation solution so very special.

Luis Paiba, Head of development and design at ALLMATIC explains: “On both sides of the material stations, there are 2 pallets each for raw materials and finished workpieces so that up to 2 different orders, including the fully automated machine setup changeovers, can be realized unattended.”

The ALLMATIC moulds for pallets for raw material and finished parts are optimally designed to be handled by robots.

When an order comes in, the robot starts by scanning the barcode of the raw material matrix and thus receives all the details for the pending production process. For this purpose, the Manufacturing Management Software (MMS) of Fastems automatically calls up the relevant programs for the automation and the machining of the workpiece. With a permanent magnet gripper, the robot retrieves a blank from the matrix and places it on a regrip stand to position it precisely. After that, the robot transports the workpiece to the pick-up station and then loads the machine pallet using the parallel gripper. 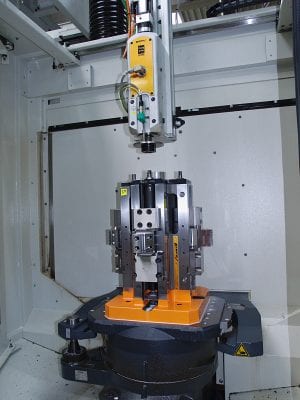 The ALLMATIC Clamp Drive (above) makes it possible for workpieces to be mounted unmanned.

For any current manufacturing process, there are always 2 fixtures on the machine so that production can be continuous and a 6-axis machining can be realized in just 2 process steps (OP10 and OP20). The automated and flexible clamping of the workpieces is handled by the ALLMATIC Clamp Drive, which is mounted on top of the robot side of the machine’s pallet changer.

A production order always starts with an empty pallet; the workpieces are clamped onto the first fixture (OP10), while OP20 remains empty during the machining phase. After the machining process, the half-ready workpieces are temporarily stored in front of the machine and then clamped onto the second fixture (OP20). Following the pallet switchover, the robot can start to load the first device (OP10) with new blanks. Afterwards, the entire order can be processed with the continuous rotation of the OP10 and OP20 process steps. When there’s a product change, the robot transports the needed tombstone for the upcoming production to the machine, while the last parts of the previous order are still within the machine.

Once a complete work order has been filled, the robot will, if needed, automatically change the pallets required for the new order (new workpieces) with devices within the machine.

“With a complex automation solution like this one, we still have to gain a lot of experience to be able to identify possible optimization potential for individual processes,” Herbert Mayr emphasizes.

Currently, the robot removes all semi-finished workpieces and places them at the buffer station and then loads the OP20 fixture with those workpieces. For the removal of all workpieces, the pallet needs to be turned. A safe clamping process would however require the referencing of the Clamp Drive between the clampings, and that costs precious time. “That’s what we want to change by having the robot first remove one half-ready part and then load the fixture with a new blank at the same clamping position immediately, without the need to turn the pallet,” says Mayr. 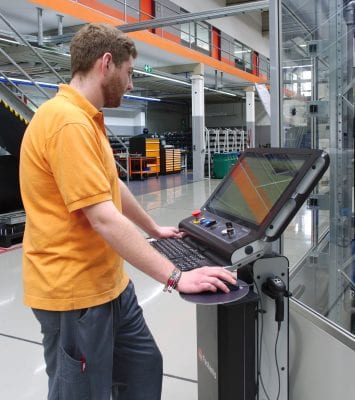 This is the employee responsible for the ALLMATIC system, standing next to the terminal for the MMS of Fastems, which among other things will handle the entire planning, controlling and monitoring of the automated manufacturing process. In addition to that, it will not just manage the NC programs but also all 160 tools and monitor their downtimes.

Since the agile manufacturing cell at ALLMATIC is designed for unattended production processes over long time periods, the introduction of new parts including the adaptation of the robot’s cinematics should require only the shortest possible period of time. The parametric programming of the robot via the Manufacturing Management Software (MMS) provides crucial support in order to achieve this.

Special knowledge about robots is not required, explains Luis Paiba and continues to say, “Fastems had already made some programs for the workpiece manufacturing available to us in advance. Whenever a new part needs to be made, the necessary motion-sequences can be easily adjusted by entering specific parameters (handling steps), without time-consuming teaching of the robot. Our employees have already using this method to create 17 new motion-sequences for the robot.”

Luis Paiba, Head of Development and Design at ALLMATIC states:

“If we want to become the technology leader, we will also have to deal with automation more intentionally, not just with regards to our products.” 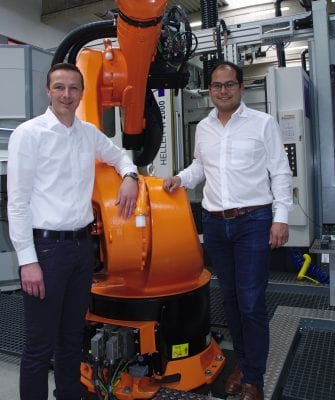 Using this automated system, ALLMATIC has not only scored in productivity and flexibility in the manufacturing process, but according to Luis Paiba and Herbert Mayr, it has also gained valuable insights.

“All parts that are now produced with the robot cell were previously made by us already. As a result of the automation, we had to change our way of thinking and thus we were able to identify new potential to optimize our processes and procedures. As an example, workpieces can now be completely machined using 2 instead of 3 clamping steps. We have adapted our workpieces for this purpose. We also added previously manual work processes to the automation by integrating a blowing and anti-rust coating station into the cell,” says Luis Paiba.

“Many manufacturers were shaking their heads about my idea for a solution for automated changeover. But with Fastems, we have mastered this challenge as well as other ones.”

It’s Not Just a Win in Terms of Capacity 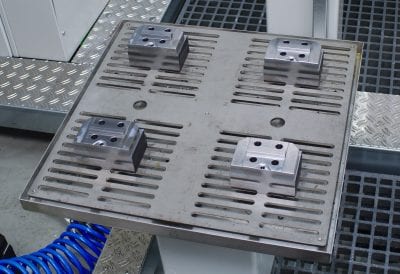 This is the pick-up station with previously machined workpieces. Currently, 32 different workpieces for machine vices, e.g. jaws, base bodies or pressure and clamping plates, in batch sizes of more than 100 per order are being produced with the robot cell.

And Herbert Mayr has gained another crucial insight:

“Automation secures jobs since we can now respond significantly better to order fluctuations. At the moment, our robot cell runs at a capacity of 90 percent, producing 32 different components unmanned in 2 ghost shifts. If the number of incoming orders were to go down dramatically, we would not automatically be forced to cut jobs since the robot cell could be run in just 1 unattended shift.”

ALLMATIC was founded in 1973 and has become a leading supplier of clamping systems since 2001 when it became a member of the Jakob Group. It manufactures products such as simple mechanical threaded spindles, NC vices (i.e. vices with power amplifiers) and Gripp vices, for example for 5-axis machining, as well as multiple and special clamping solutions.

The company currently has 73 employees, including 16 apprentices, and develops and makes innovative solutions for the market worldwide at its headquarters in Unterthingau in the Allgäu region. Their prime market is Europe, above all Germany, followed by Austria, Italy, France and Romania. In 2018, ALLMATIC-Jakob Spannsysteme generated a turnover of about 10.8 million euros.

See the Clamp Drive in Action

Ready to find a solution?