Doesburg Components, part of the Gietburg group, will be investing heavily to expand its production over the coming years. Work is already underway with a special robot cell that processes cast-iron components for truck brake systems, and more robot cells will be added over the coming years. Doesburg Components is looking to produce more products with the same staffing level, something that will only be possible with a high degree of automation.

“There are three important reasons behind automation”, explains ­Jos ­Smeets, Director of ­Doesburg ­Components. “The first is the relatively high hourly wage in Europe, the second is the physical burden on the operators, and the third is the distinct lack of highly-trained individuals. Back in 2009, we were achieving 60 % less turnover, but now we are running at full production capacity, and CNC operators are almost impossible to come by. Of the 10 CVs that you receive, you might hope that one of them is from a person with sufficient experience; that is how difficult it is”. Over recent years, Doesburg Components has significantly increased its staffing level from 60 to 103 people. “But further growth has to come primarily from automation,” explains Smeets. “We used the economic downturn to get in touch with new customers, and they are looking to purchase a great many products now and over the coming years. The number of braking system products that are processed on the new robot cell has been set to 150,000 parts per year, but the customer has already increased this demand to 240,000”.

Doesburg Components has other major plans in the pipeline. The company intends to invest heavily in expanding its machinery. Smeets continues, “2011 looks like it will be a better year than 2008. A new generation of trucks and diesel engines is being made available, and these trucks feature increasingly more complex parts. Our engineers make regular visits to our customers to work on devising new designs for the new components. It is only by doing this that you are able to achieve fully-automated processing at the lowest possible overall cost price”. To ensure that the company is prepared for the future quantity of products, Smeets wants to invest around 10 million Euros in new, robotized and automated machining centers over a period from 2011 to 2015. “But we place strict requirements on the machine and robot suppliers”, Smeets points out. “Up-time in the automotive industry is extremely important, so we only purchase machines from suppliers who can provide rapid service. We cannot find ourselves waiting a whole day for an engineer”. 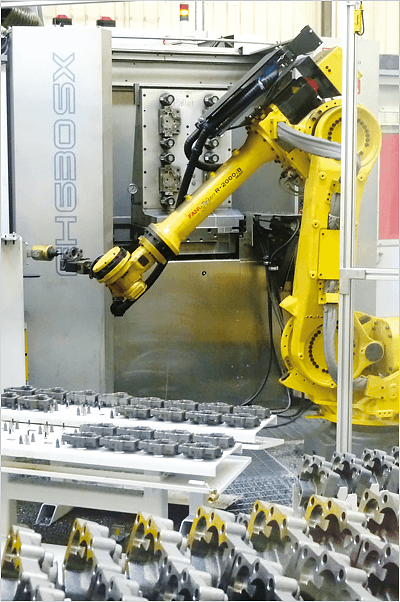 After machining, the robots deburr the parts before returning them to the material station. The newest robot cell is the first part of the new investment drive. The robot cell includes two machining centers, a Quaser MK603S vertical machining center and a Toyoda FH630SX horizontal machining center. The machines were supplied by Alfred van Meegen and Toyoda Europe in ­Krefeld, Germany, while Fastems was responsible for the automation and complete delivery of the turnkey project. The ­Quaser and ­Toyoda are positioned at right angles to one another. There are two robots, one in front of each machine. A buffer table is located between the two robots, onto which they place products and from where they pick them up again. “That is important to productivity”, explains ­Henk ­Kremers from ­Valkworks. ­Valkworks is the Fastems representative in the ­Benelux. “We based the design on the customer’s product. Does the product need to be machined on two sides? Does it need to be machined horizontally or vertically? How long is the machining time of the product and what is the robot’s handling time, including deburring? After looking at all of these aspects we decided that one robot would not be sufficient as it just wouldn’t be able to keep pace with the machining centers. So we decided to use two robots, with a buffer table between them”.

Even the two Fanuc robots are barely able to keep up with the ­Quaser and the ­Toyoda. They are barely ever still. The first robot, in front of the ­Quaser, picks up unprocessed cast iron parts from the material station. Four parts are clamped at once on the fixture on the ­Quaser. After machining, they are deburred by the same robot while still clamped on the fixture, after which the robot places them onto the buffer table. The second robot then picks up the parts from the table and clamps them on the fixture on the ­Toyota. At this point, only one side of the parts has been machined. Four parts are clamped at once on the fixture on this machine as well. The ­Toyoda machines the other side of the parts. Once machined, the second robot retrieves the parts again one by one and deburrs them. The finished parts are then placed back onto the buffer table, from where the first robot picks them up and delivers them back to the material station. This work cycle is repeated continuously. A door, which usually remains open, is located between the two robots. The buffer table is split into two halves, and the door can slide between the two. ­Kremers explains, “The door forms part of the safety system. If one of the two machines is out of action for measurements or minor maintenance, the other robot cell can still process 10 to 12 parts. It is important to keep machine standstills to an absolute minimum”.

In addition to the power of the robot cell, the greatest challenge of this turnkey project was integrating the robot software with the machine tool control. ­Kremers continues, “The robot cell has been designed to process around 30 parts per hour, from semi-finished cast iron to fully-machined and deburred end products. This means that the robot controls the machine. The robot tells the machine when it can begin machining. What is more, it is important that the robots never collide with one another”. ­Fastems took care of the entire integration process, including software. The main control cabinet is equipped with a remote connection to the ­Fastems head office in Finland so should any problems arise, they are resolved from there immediately. Kremers concludes, “When the robot cell was delivered to ­Doesburg ­Components, it worked well pretty much from the outset. It was simply a matter of thorough preparation and knowing what the customer wants.”

Doesburg ­Components of Nieuw‑Bergen works primarily on the delivery and increasingly on the development and engineering of installation-ready components (cast-iron and processed cast-iron components) for the international truck and agricultural industry. Components are supplied to customers including DAF, Deutz, ­Leyland Trucks, ­Daimler, MTU, ­Wabco, ­Lely and ­McCormick. ­Doesburg ­Components is part of the ­Gietburg group, which also comprises ­Modelmakerij ­Hengelo, ­Gieterij ­Doesburg, ­Cirex in ­Almelo, ­Gietburg and the recently taken over ­Arbin ­Components of Venlo.