As far as possible, system integrators should be experts in the disciplines of both hardware and software. Particularly the “soft” side of automation has become immensely more important, not least because of Industry 4.0. The magnitude of this is demonstrated by a challenging project of MTU Aero Engines AG. The aircraft engine manufacturer was looking for a partner to implement a highly automated blisk production system and opted for Fastems, whose many years of experience in software development enabled it to provide the necessary intelligence for the solution that was envisaged. 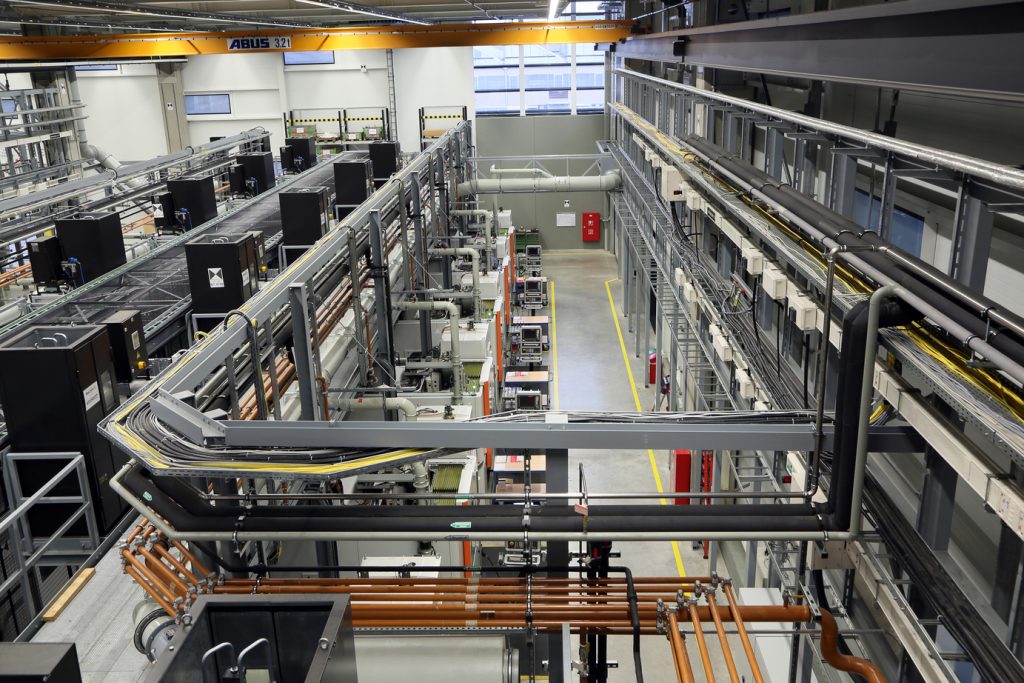 The milling and mill-turning machines are linked in four flexible manufacturing systems, consisting of one main system and three subsystems. The picture above shows one of the subsystems on the left. (© MTU Aero Engines)

“This system is unique”, says Walter Sürth, Head of Blisk Production at MTU Aero Engines, and anyone familiar with the implementation of the ambitious project for highly automated production of titanium blisks will certainly agree. But first things first.

The Munich-based company began producing blisks (see below) in the mid-1990s. “Back then we started developing engine components for the Eurofighter, and then for more than ten years we manufactured products including components for the TP400, an engine for the Airbus A400M military transporter,” explains Sürth. The development of the PW6000 turbofan engine for the Airbus A318 in cooperation with Pratt & Whitney enabled MTU Aero Engines to start producing blisks for the civil aviation sector. The production manager describes this engine as a “technological quantum leap”, because for the first time a gear unit was installed between the large-bladed fan and the compressor stage to decouple the two components from each other: “The results are less noise and above all significantly less kerosene consumption.” 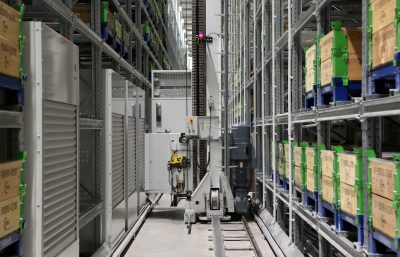 5-fold increase in production in a limited space

With the entry into the civil aviation sector, demand for blisks for geared turbofans also increased. “At the time, we were set up for producing around 600 blisks a year for military aircraft engines. However, our forecasts told us we needed to increase our production capacity to around 3,000 titanium blisks per year for both the military and civilian sectors – and all that here at this site,” reports Walter Sürth.

This meant our options were limited by the space available. The construction of a hall on the site with a production area of ​​5,000 square meters was planned, among other things in order to provide the space required for an extensive set of machinery. The production manager gives an impression of the expectations: “The mill-turning centers had to be in operation for about 5,000 hours and the milling centers for at least 6,000 hours annually in order to handle the forecasted production. In addition to this, we manufacture our highly complex blisks – some of which take anything from 40 to 100 operations to machine – in batch sizes of one, as otherwise the lead times would be too long. The average lead time for a blisk is currently 60 days. That’s why we need highly efficient logistics, integrated in a powerful and intelligent automation solution.”

A smart MES was the key

However, according to Walter Sürth, it wasn’t easy to find a partner to implement a project like this, where total of 24 milling centers and mill-turning centers were linked in a single, highly automated solution. Most suppliers turned down the project straight away, due to its size and complexity. In the end, there were only two companies that could cope with the challenging demands. “In the end we chose Fastems because, in addition to the hardware, the company also offered its own software as an intelligent manufacturing execution system (MES) to control the overall solution. That was ultimately the decisive factor.”

Construction of the hall began in 2012. At the same time as construction was being planned, attention was turned to the automation system, which meant the hall was built almost simultaneously with the multi-level systems (MLS) for linking the machines. The new titanium blisk facility started production as early as April 2013. 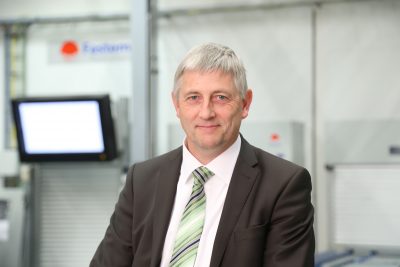 “One of the key features of our automation concept is separation of material flow. We don’t manufacture in a line but can distribute every pending work operation to any machine. That’s also why we can accommodate the machine tools in such a tight space,” explains Walter Sürth.

The interlinking of milling and mill-turning takes place via four Flexible Manufacturing Systems, including a gantry loader and three MLS  from Fastems, divided into a main system and three subsystems that together form a system solution. The main line extends to a length of about 90 meters and is eight meters high. It is double-sided and has 15 levels (eight at the front and seven at the back) for a total of 1,031 pallets (machine and material pallets). This is connected to two MLS lines, each with 12 Mikron HPM800UHD milling centers. Each line thus links six opposite machine tools. The gantry loader has seven Monforts UniCen 1000 mill-turning centers.

Manfred Sürth says: “The main system has two stacker cranes. After all, we have about 75 transport movements in the system in one hour, which would be difficult to achieve with only one stacker crane. The second crane also acts as a backup, so if one of them fails, it doesn’t mean that production has to stop.”

A stacker crane in each of the two subsystems for the Mikron machining center loads and unloads the machines from the rear so that operators have unrestricted access to the machine chamber at the front. This principle also applies to the mill-turning centers, which are loaded using a gantry loader. 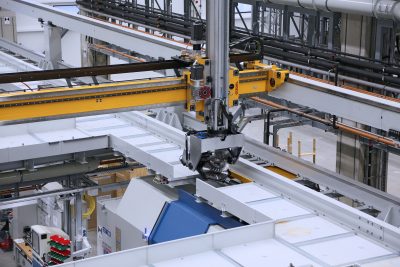 A real increase in efficiency

According the production manager, the loading and unloading alone means that the Monforts cannot run as autonomously as the milling centers with workpieces requiring long machining times of between 20 and 40 hours. “However, automation with the gantry loader gives us a decisive increase in efficiency. Despite very short processing times of between 20 minutes and two hours, we were able to increase the throughput of these machines by a factor of 4 to 5,” says Walter Sürth, emphasizing the manufacturing quality in connection with the demand for high productivity: “From a technological point of view, the production of blisks is the best that can be expected from a machine tool in terms of precision and therefore repeatability. However, if the workpieces aren’t set up accurately, not even the highest-precision machines are of any use.” This is why the main MLS has three Fastems high-precision set-up stations where the devices can be fitted on zero-point clamping systems for both mill-turning and milling centers. “The accuracy of the set-up stations is comparable to the machine tools. This means potential errors are avoided and cannot even enter production,” says Sürth.

The Manufacturing Management Software (MMS) from Fastems, which is specially adapted to the extremely stringent and specific requirements of blisk production, serves as a nervous system for the overall automation solution. The control system plans the entire production for 96 hours in advance and must constantly be able to manage up to 1,500 jobs. Put another way, this can be around 150,000 manufacturing operations. If the deadline is moved, the MMS reschedules the entire production in real time, again for four days in advance.

The main MLS is equipped with a gate to the test area. On the command of an operator, the MMS coordinates the transport of a semi-finished or finished part for a quality inspection (© MTU Aero Engines)

All manual processes also under control

Because it is also connected to the ERP system, the control system not only carries out the detailed planning and organization of automated production according to the job scheduling and prioritization, but also has all manual production processes under control. Walter Sürth explains: “When a part is taken out for a manual task and later returned to the system, the software keeps track of it, taking account of these activities in the inventory management.” A good example of this is the quality inspection of semi-finished or finished parts. For this, when commanded to do so by an operator, the MMS coordinates the transport of the test piece to a measuring chamber which is connected to the main MLS above the production system by means of a transfer station.

“For production planning, the software also performs a complete availability check of all resources. For example, it checks whether the work pieces are in the system for machining, and manages all the tools, including their service lives, as well as the NC programs that are transferred to the respective machines by the MMS according to the production process,” says the production manager, describing a few of the other features.

Usually the control system plans production to complete an order in a way that achieves maximum machine utilization. In the non-linear production at MTU Aero Engines this is somewhat different. “Specific workpieces are only produced on certain machines. The control system also has this information so that it can assign these components directly to the right machines based on the described resources as part of a highly efficient chaotic production strategy. The entire logistics for this and all the other workpieces is fully automated,” emphasizes Sürth.

Production almost around the clock

For that reason, you won’t find any forklifts or similar transport vehicles in the blisk production plant. The goods are received via a gate in an outside wall of the hall, through which the raw material is transferred in containers with RFID chips directly to a conveyor belt in the hall. “Because the ID on the chip is automatically scanned by a reader and always has a status link to an SAP order, the system knows when the material for a specific order has arrived at our production site. From this moment on, the MMS begins its planning and inventory management,” says Walter Sürth, who makes a positive summary of the overall solution and is already looking to the future: “We produce in three shifts, six days a week. On Sundays and public holidays, we do another three completely unmanned shifts on the Mikrons. But we still haven’t reached the limits of our capacity utilization. The forecasts have now risen to around 7,000 blisks for the military and civil aviation sectors. This means that in future we’ll outsource the military blisk manufacturing from our current production and only make components for the civil aviation sector using our automation system. The plant has the capacity to produce around 4,000 blisks each year.”

A blisk (blade integrated disk) is a single-piece rotor stage for aircraft engine compressors. A distinction is made between nickel blisks, which are produced using an electrochemical process, and titanium blisks, all of which are produced by machining. In simple terms, modern turbofan engines essentially consist of a low- and high-pressure compressor and a combustion chamber. There is also a fan with large blades in front of the compressor stages. This is driven by a low-pressure compressor via a shaft and accelerates the air flowing in from the front, about a tenth of which enters the core engine. The remaining nine tenths provide the thrust. In a geared fan engine, the compressor stage is decoupled from the fan via a gear unit. This means the fan can run slower than the low-pressure turbine, resulting in lower noise emissions and less fuel consumption.