From a garage shop to a multi-billion listed company

Rapid technological development and globalization are reshaping the playing field of Swedish manufacturers – in order to be and remain competitive, all the production capacity needs be utilized well, as well as being able to increase the capacity when the volumes increase in the future. This is what many engineering companies are struggling with today, and why eComponent decided to act. 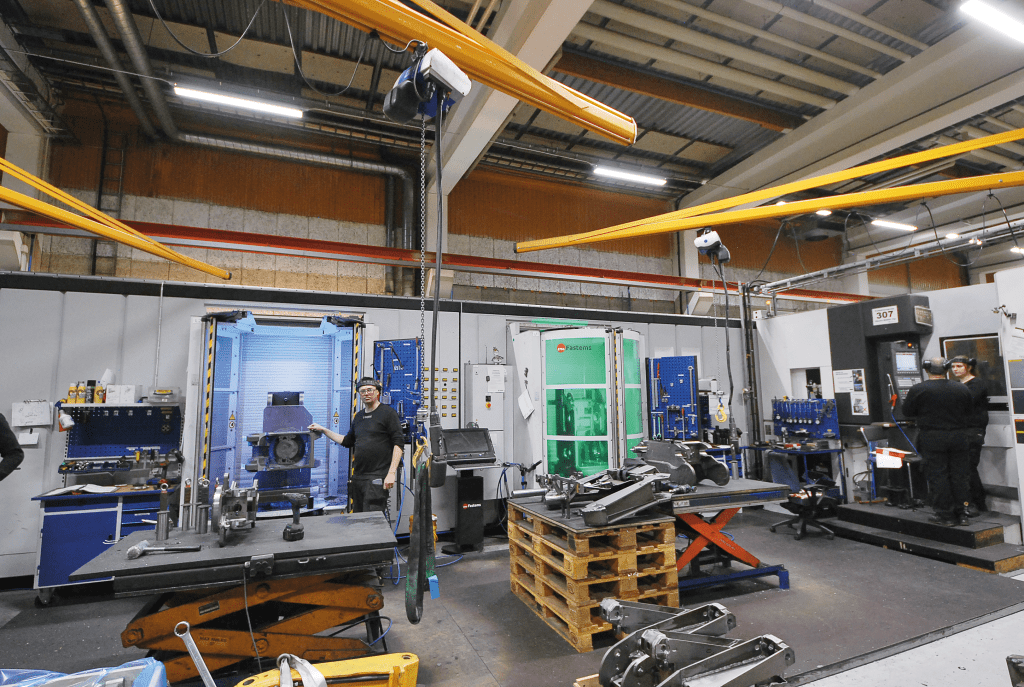 Automated production is crucial for Swedish engineering companies to compete now and in the future. With the right use of automation and robotics, the Swedish manufacturing industry can compete with anyone in the global marketplace.

We are sitting around a coffee table on Godsgatan in Strömsund, Sweden with Patrik Johansson, CEO and Emil Martinsson, Production Engineer of e-Component; and Henrik Brodén, Sales Manager of Fastems. The 5,000-square-meter workshop is next door to the assembly plant of Engcon group, and the entire area where this industrial company is housed must be at least 20,000 square meters. Today’s agenda is automating CNC machines with Flexible Manufacturing Systems (FMS).

“We have a common vision and production philosophy at the company and making our daily work efficient and use as many hours of the day as possible with the help of automation”, says Emil Martinsson who has worked at eComponent since 2001. “I share my production philosophy with Fastems’ 8760 mantra – the number of possible production hours in a year.”

“Finding, recruiting and retaining skilled people is our top priority. We grow faster than the number of skilled employees in the market, so it is a continued hunt for employees.”

It’s an ambitious challenge, but Emil who competes internationally in air rifle shooting loves challenges. “I want to master my work and get better every day, and I constantly try to motivate my colleagues to do their best as well” tells Emil.

Competitive people can be found in all jobs and missions – if you want to get ahead, you have to be driven. “Our employees are vital for our success, which is why finding, recruiting and retaining skilled people is our top priority. We grow faster than the number of skilled employees in the market, so it is a continued hunt for employees,” says Patrik Johansson.

Established in a garage 1990, Engcon AB is a world-leading and publicly listed manufacturer of tiltrotators and associated attachments that increase the efficiency, flexibility, profitability, safety, and durability of excavators. The company turnover is several billions SEK and it offers unique tiltrotator systems which transform the excavator into a tool carrier that can replace other machines. eComponent where we are at today, is Engcon’s manufacturing unit. 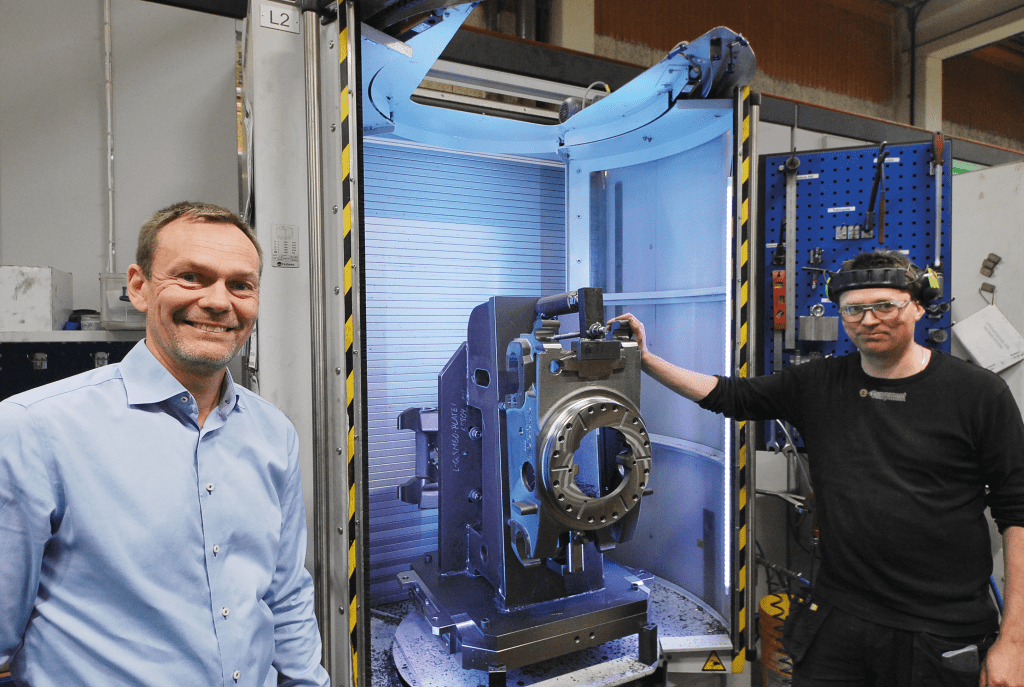 “We compete in efficiency and quality every day”

“We are investing more and more in automation, which we have done for over a decade, so it is nothing new in our production ideology. Due to the latest technology that allows us to run production unmanned around the clock, we have gained better productivity results than with older technology a decade ago,” explains Patrik Johansson.

“There are other benefits in having a high level of automation. It is very ergonomic and safe for the operators, the production set-up times are reduced to a minimum, and the automated systems generate a very high and consistent quality,” describes Emil Martinsson.

As eComponent’s production has become more complex and fluctuates rapidly, it’s highly important to keep everyone on the factory floor up to date with the latest information. From production logistics point of view, the machine operators need the information on:

“Automated production is very ergonomic and safe for the operators, the production set-up times are reduced to a minimum, and the automated systems generate a very high and consistent quality.”

“Today, we have four FMS systems (which are expandable for several more machines) and if compared to our very first Fastems automation system FPC (Flexible Pallet Container) from 2009, today we have gone from 4 pallets to a total of 150 pallets. And it has gone from 20 employees in 2010 to almost 60 employees today in 2022, this after merging in 2020 with a local welding company of 18 people. This means we have tripled our number of ­employees, and our overall productivity has multiplied with the help of automation. Our ERP shows that we have produced five times more in 2021 than we did in 2010.”

When we enter the shop floor, we see a multi-operation machine that is currently waiting to be connected to the largest Fastems FMS system at eComponent. These CNC automation systems solve the various problems that a fast-growing company faces, such as managing higher production rates, reducing set-up times, increasing quality and productivity – producing more in shorter time and with less resources. We will tell you about the different systems that have been installed here in 2018, 2019 and 2022 in chronological order.

But first we ask Henrik Brodén a general question. What does Fastems automate?

– We can offer the industry a complete solution where Fastems takes total responsibility for the automation. Our mission today is to adapt and customize automation systems for manufacturers’ machine operations, from a simple cell with one machine up to fully automated FMS systems including dozens of machines of different sizes, different functions and from different brands. Often moving both pallets and direct handling work pieces in the same system. With our proprietary software MMS, we can control the entire process from robot operation, pallet and fixture systems, external tool magazines, CMM, washing machines to AGV solutions for transporting production resources. This and much more is handled by the single software MMS, which becomes the “nervous system” of production and also integrates with customer’s own business systems.

“We have tripled our number of ­employees, and our overall productivity has multiplied with the help of automation. Our ERP shows that we have produced five times more in 2021 than we did in 2010.”

“This system is the first “real” FMS at eComponent, called Fastems Multi-Level System (MLS), and is more than 50 meters in length and 6 meters in height. Today, four OKUMA machine tools are integrated and there is room for four more. The FMS also has two integrated laser hardening cells from PERMANOVA, which take care of finishing the parts before they move on to the ­next operation, which is the paint shop. In addition, there are four loading stations where the raw materials are loaded onto their fixtures. The whole system is linked to the eComponent’s ERP system Monitor which sends the production orders and likewise receives notification back when the parts are ready,” explains Henrik Broden.

“The newer version of our Flexible Pallet Container, the very first system at eComponent from 2009, was installed 2019. The FPC is a factory-tested automation that is shipped as a ready container, and in its basic version this size class (1,500 kg) can store 10 machining pallets. The FPC is fast to deliver and install and has all the pallets and fixtures ­available in the system right away – the production is very fast to ramp up. Here at e-Component, the FPC is fully expanded with two additional containers, automating three OKUMA machine tools and storing a total of 30 machine pallets. The system also has two loading stations for clamping the work pieces and unloading the ready jobs – and is controlled by the already familiar Fastems Manufacturing Management Software MMS, like our other systems” says Henrik. 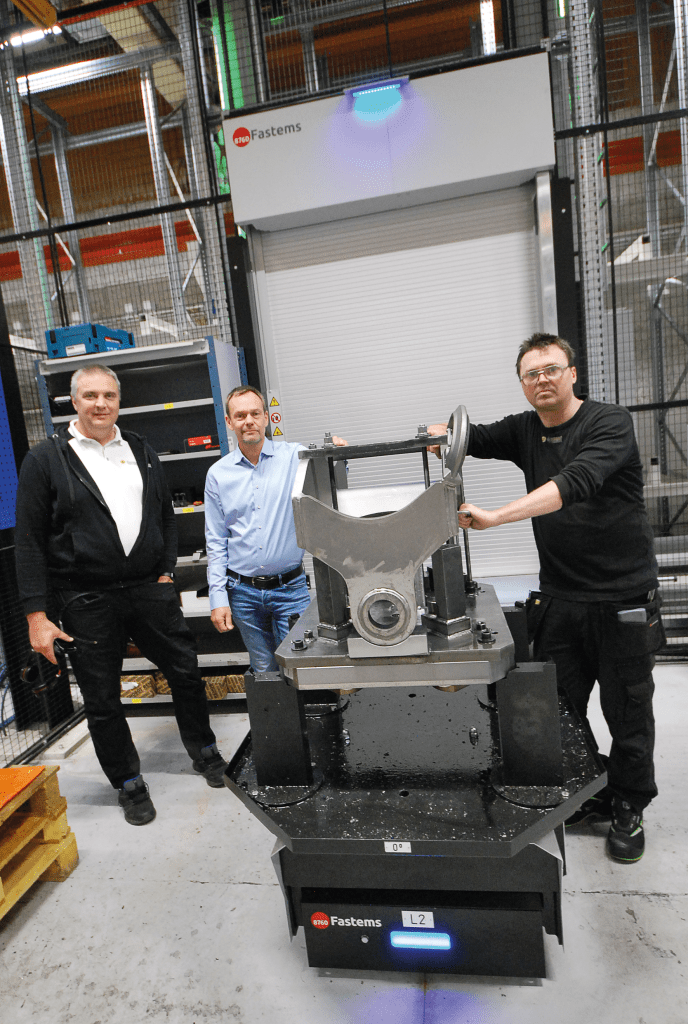 “With effective and flexible automation, we can work with our customers to create well-developed ­machining processes that create unique value,” says Henrik Brodén, Sales Manager at Fastems AB. In the photo we also see Patrik Johansson and Emil Martinsson.

“The latest system at e-Component was installed early this year and it is currently running one machine. The second machine will be integrated within the next few days. The nice thing about this system is that it combines two machine sizes, a 630 machine and an 800 machine from OKUMA. The FMS crane can adapt to the handled pallet size automatically, and the system is also built all the way up to the rafters to utilize the floor space well.”

Finally, we ask Henrik Brodén how the ­market is reacting to the strong signals about automating and, above all, automating more. “Sweden is and has always been a pioneer country when it comes to taking new technologies into use and developing them. The human-machine interaction also plays a much larger role in today’s solutions, requiring simplicity and ­flexibility of an automation system. Nowadays it is generally known that we need to automate our processes to be competitive in the western countries – we need to use all the available spindle time. The number 8760 describes available production hours in a year. Fastems strives to enable its customers to achieve this goal with the help of the right automation – both the hardware and software. The need to automate existing machines is also increasing strongly. This is partly due to the desire to make greater use of the machines manufacturers already have, and to avoid new construction which might mean long lead times for new machines and difficulties in finding new personnel.” 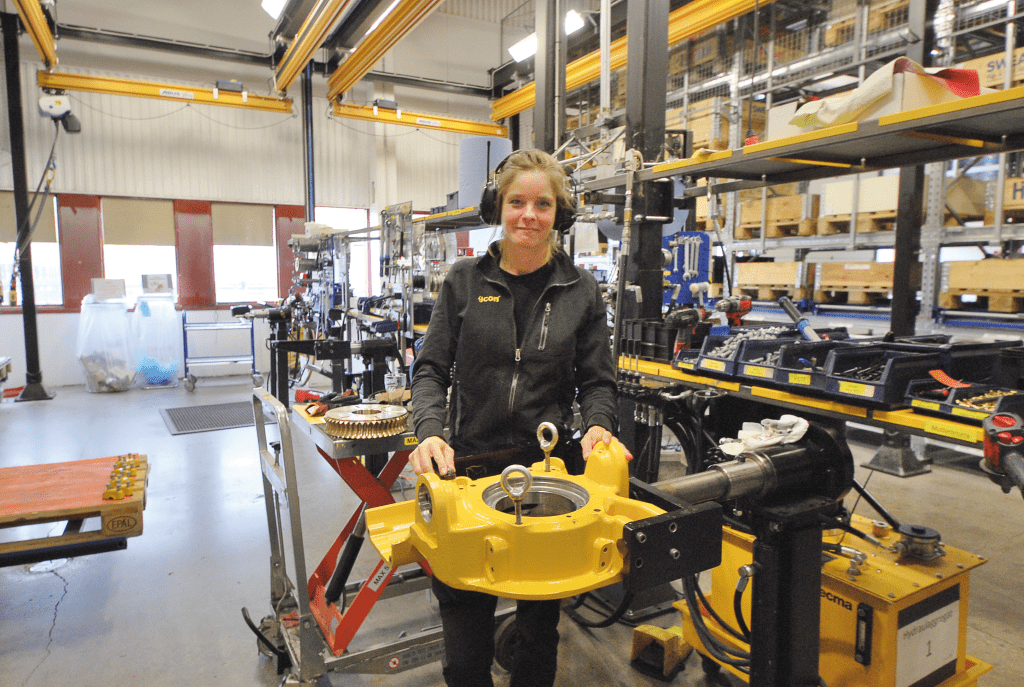 The product is built around the “Yellow Heart”. Here we see a picture from the assembly at the factory in Strömsund. 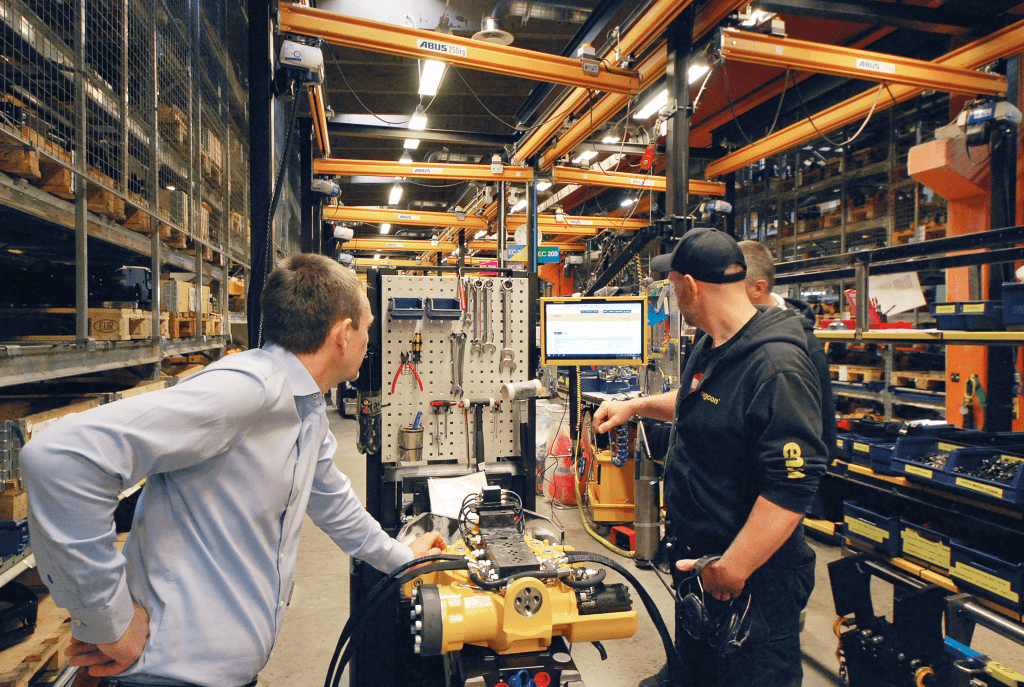 The assembly is in full swing and takes place in efficient processes.