Kytola Instruments Oy has shown that the aim of achieving higher productivity in machining manufacturing does not necessarily involve investment in new machines. To start off with, the Finnish company decided on a flexible automation system from Fastems for two existing machines in order to gain experience. With thoroughly positive results, as has been shown.

Kytola Instruments develops and manufactures measuring devices for flow measurement and monitoring. “The level of precision required from our products is very high and this is reflected by our machinery park”, says Sakari Hayrynen, CEO of Kytola Instruments Oy. The company has its headquarters in Muurame, around 170 miles north of Helsinki.

“We currently have around 20 CNC machines with which we process very different rust-free materials such as aluminum, stainless steel, brass and technical plastics, the last of which are particularly important as a raw material for us”, explains Production Manager Jarmo Tuohimetsa, before adding: “The delivery times are very short and therefore we create the necessary flexibility for the final assembly of the products with a store of several thousand components. In addition to that, just-in-time parts make up around 20 percent of overall production in specific projects. The manufacturing range is therefore very diverse. At this site, we have roughly 70 employees on approx. 8,000 square meters producing 1,000 different parts in batches of between 1 and 5,000 pieces.”

Small to medium batch sizes are not necessarily arguments for a high degree of factory automation, especially if the workpieces to be processed on the machines change regularly. According to the Production Manager, a number of machines in the plant have been fitted with sufficient tools and loading systems to ensure low manpower production. “However, we wanted to increase our manufacturing productivity – not by purchasing more powerful machines, but, as a first step, by initially automating two existing type Mori Seiki NH 4000 CNC machining centers to see what benefits this would really have for us”, explains CEO Sakari Hayrynen. 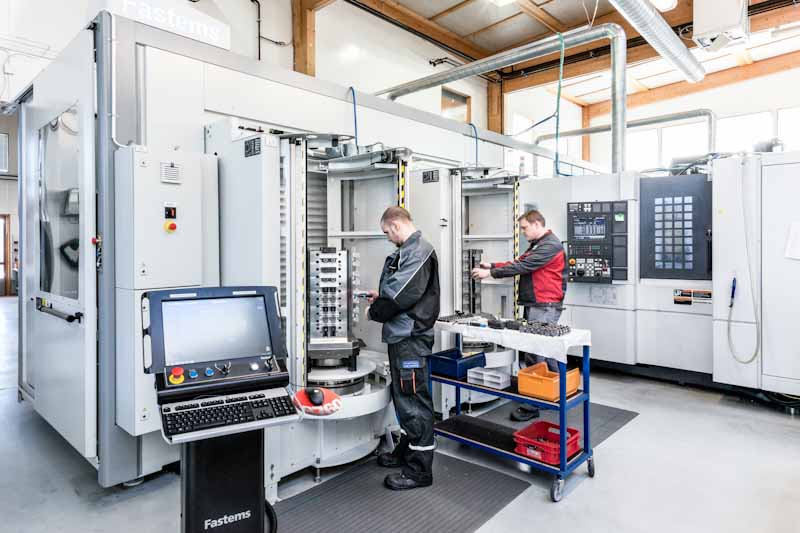 To automate the two approximately six-years-old machining centers, Kytola Instruments decided on an FPC from Fastems. FPC stands for flexible pallet container. The term “container” takes on a certain charm in this context when we take a closer look at the automation solution. An FPC is a complete flexible manufacturing system (FMS). The basic version with up to 12 pallet places can be connected to a machine tool. The system was delivered fully configured in a container unit to the customer, meaning that installation and commissioning could be conducted most rapidly on site. If required, an FPC can be extended with little effort to up to three containers with a maximum of 36 pallet places and a maximum of three machine tools of the same type can be connected. 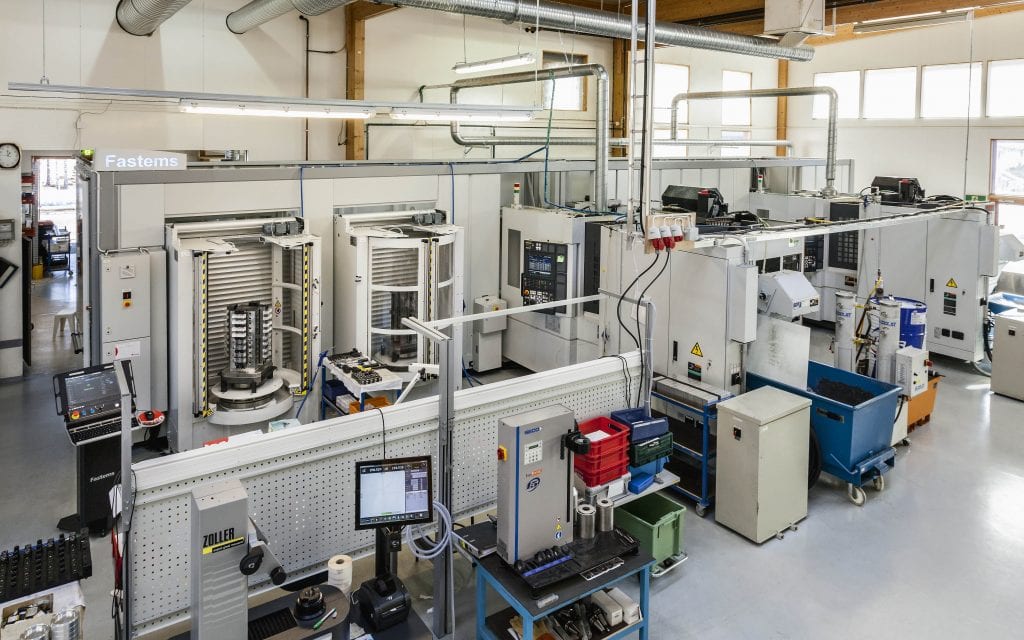 The FPC enables a flexible entry to the world of factory automation with one machine being initially connected to one container. The system can be expanded to up to three containers, to which a maximum of three machine tools of the same type can be connected. 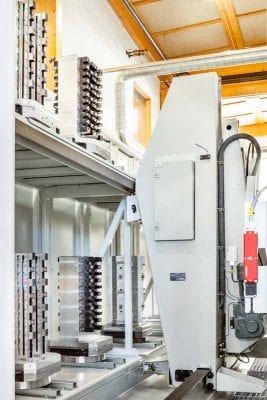 A complete FMS in a compact container. A stacker crane transports the pallets to the loading and unloading stations as well as to the connected machines.

Kytola Instruments chose a FPC-750 with a maximum loading weight of 750 kg including pallet plus one expansion container to automate the two Mori Seiki NH 4000 units. Sakari Hayrynen: “Instead of four pallets for two machines, we now had a total of 24 pallets for the machining centers. This is a great leap forward in terms of manufacturing productivity and flexibility.” Measured in terms of production hours of one day, the spindle running times of the two machining centers was previously about 30 percent. 70 percent was taken up with preparations for production including the set-up times on the machines.

“In the past we needed larger manufacturing batches for these machines to be productive. This is no longer the case thanks to the capacities of the FPC, meaning that we can manufacture even very small batches very economically especially as we are also very flexible with regard to workpiece clamping thanks to solutions from OK-Vise. Ultimately this means reduced set-up times that have been decoupled from the machine running time and more productive hours on the machines”, explains Jarmo Tuohimetsa, who then adds: “The two loading and unloading stations on the FPC also contribute considerably to this.” 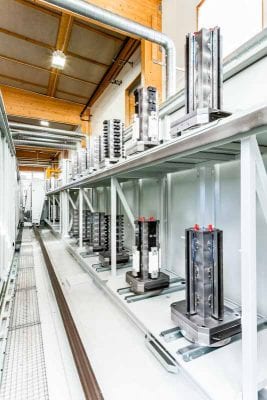 The basic version of the FPC was extended with one container with the result that currently 24 machining pallets are available for automated production.

When it comes to whether such a system attains the expected manufacturing productivity, the Production Manager believes that the number of loading and unloading stations on an FPC is a factor that should not be underestimated – just one station for loading and unloading can quickly become a bottleneck in the automation solution:

“Instead of this, we have the possibility of unloading the FPC via one station and preparing another pallet for subsequent production at the second station.

Particularly after weekends with automated manufacturing there are only clamping towers with ready parts on the pallets in the FPC. We first need to unload these before we can supply the system with the newly loaded pallets.

The more loading and unloading stations that are available, the more capacity you have.”

The installation of the FPC and the connection of the machining center took about two weeks and was then tested in live production with the NC programs of the machines that had been adapted to the FMS. “As 300 different programs are used for parts production with the machines, we decided on this test phase for reasons of process security. Of course it took a certain amount of time to do so”, says Sakari Hayrynen. As soon as a new part needed to be manufactured, the program was tested on one of the two machining centers and regular manufacturing continued at the same time on the second machine. In this way all programs were introduced successively to the new flexible manufacturing system.

“Just a few weeks after commissioning the automation solution and the test phase for the programs, we noticed the first positive effects with regard to increasing productivity”, says Production Manager Jarmo Tuohimetsa. The spindle running times for each machine have nearly doubled thanks to the FPC. This is also because we were able to continue production in the additional night and weekend shifts without manpower.

“The increase in productivity was so high that we decommissioned three older machining centers and have since sold them.”

Furthermore, we could also incorporate parts into the flexible manufacturing system. It would not have been possible to match the economical production of these with the two machining centers as a stand-alone solution. And all this comes with a ROI time for the automation of less than two years”, is how Jarmo Tuohimetsa emphasizes the first, very pleasing, results. 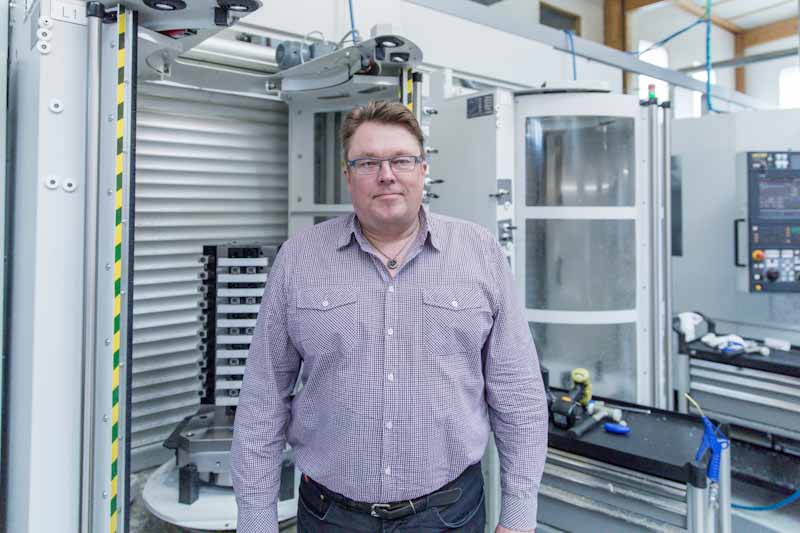 Jarmo Tuohimetsa, Production Manager at Kytola Instruments: “The increase in productivity is so high that we have been able to decommission three older machining centers and have since sold them.”

However, even a factory automation solution as productive as this has its limits, as the CEO of Kytola Instruments knows all too well: “Because we had reached a limit in terms of the tool places at the machines and the number of pallets in the FPC, we recently upgraded the FMS with the aim of increasing manufacturing productivity.”

To do so, two existing machines were replaced with two Mori Seiki NHX 4000, and the capacities of the FPC were increased by adding another container with twelve pallet places. “We now have a total of 36 pallet places available for flexible manufacturing. Because the two new machining centers also provide 240 instead of 60 tool places per machine, this has also broadened its range of applications.” In the meantime, Kytola Instruments is using the FMS for around 350 different manufacturing operations. Around 50 NC programs that were already being used for the automation system could be used without any changes, and other programs could be used with only minor modifications.

Working on the project also provided the opportunity to optimize the ergonomics at the loading and unloading stations by raising the level of the fixtures to provide better accessibility to the clamping towers for taller employees as well.

“The upgraded FPC and the new machines have allowed us to increase our production capacities by 50 percent. Our first objective is to realize long, unstaffed production periods, above all over the weekend. Moreover, the FPC also provides us the option of integrating another machining center and thereby expanding production capacities even further”, as Jarmo Tuohimetsa explains.

“All things considered, together with Fastems as a provider of factory automation systems, we have implemented a solution that is likely to give us highly promising potential of even higher manufacturing productivity and flexibility for the next few years”, says Sakari Hayrynen with conviction.