Kongsberg Automotive manufacturers various machined parts for heavy vehicles in Hvittingfoss, near Kongsberg, Norway. Production is also focused around aluminum spare parts for clutches such as housings and and actuator components. Since the lates 1990s, KA had used four Makino a55s integrated into a Makino FMS (flexible manufacturing system), as well as one additional a55 operating stand-alone. After decades of production however, the company was facing a challenge: The old FMS was at risk of breaking down and there was no possibility for spare parts.

What to do when operating four a55s in stand-alone mode isn’t an option, and continuing production is essential to end customers? 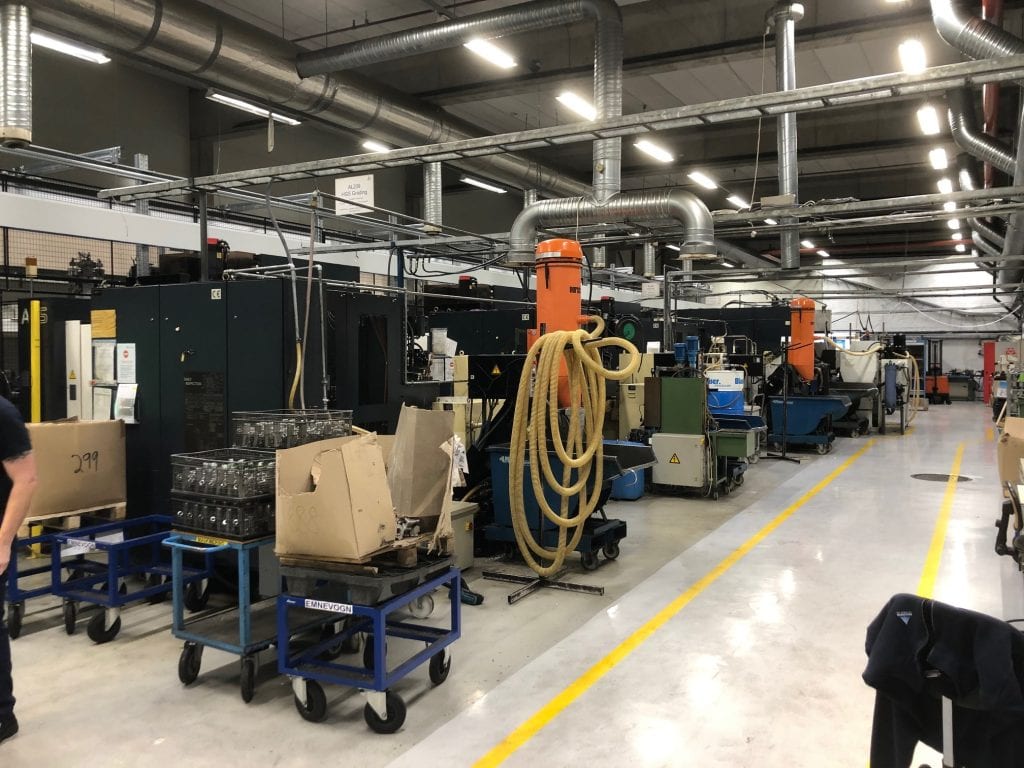 Four out of the five Makino a55s mounted to the Fastems FMS ONE on the left.

Håvard Buan, Facility Manager at Kongsberg Automotive was in charge of investments at the plant and knew they needed to find a solution. He considered investing in a new FMS to be the only reasonable way forward. After searching for potential suppliers, Buan came across Fastems and saw them as most suitable for the job for two reasons. First, Håvard had heard good feedback about Fastems’ systems from other companies in the past and trusted in Fastem’s capability to deliver this kind of “brownfield project”, i.e. the automation of existing machine tools. Because the project required making updates to the existing Makinos, Norwegian dealer Kaspo Maskin played an important role in getting the interfacing right. From Fastems’ side the main contact person around the delivery was Henrik Brodén, responsible for the company’s sales in Scandinavia.

What was the agreed solution?

In 2018, KA decided to invest in an FMS ONE system. This is Fastems’ productized, larger scale flexible manufacturing system, capable of handling up to ten machine tools. The existing Makinos wanted to be kept in production because they were in good shape and could meet the precision requirements. It was clear the machines still had many years left in them. In the future, the machines will be replaced one by one once they meet their ends, making the FMS ONE investment the first step to higher productivity at Konsberg Automotive. 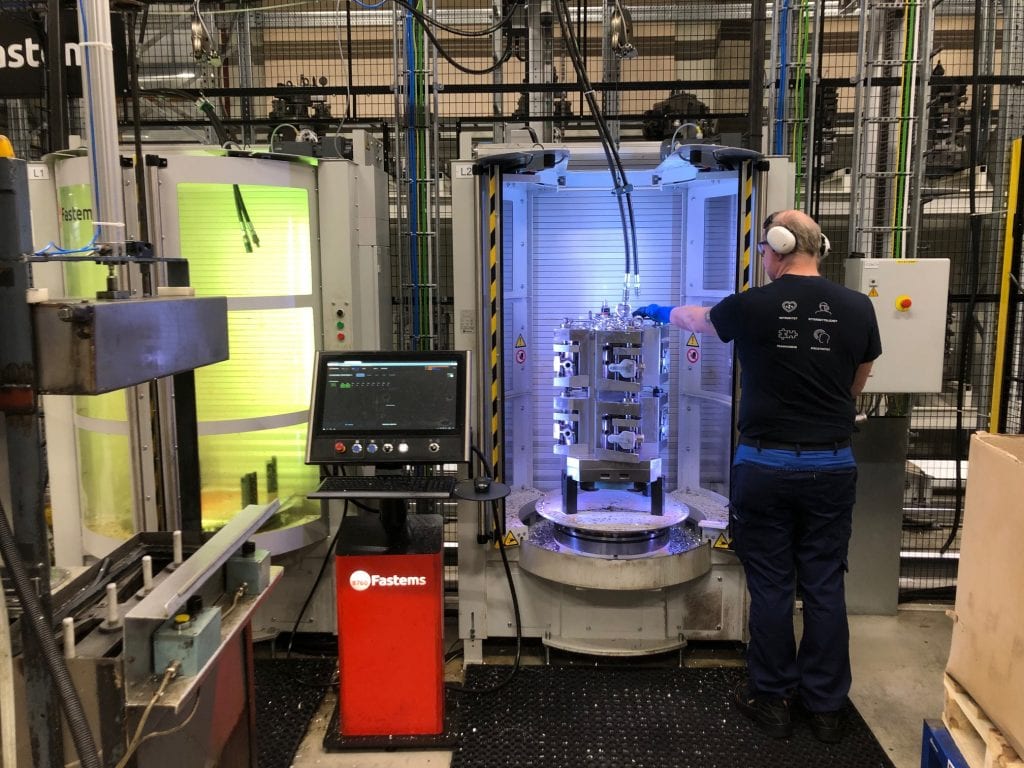 How did the project go?

In Håvard’s experience the project was very successful and stayed on schedule. The biggest worry at the time of the investment was the interfacing: how much trouble will it cause? A very understandable concern given the nature of the project!

Agreement-wise, the project was purchased as a turn-key solution from Kaspo Maskin, who also was responsible for preparing the interfaces for the Makino machines. In the pre-study that was conducted on-site with both Kaspo and Fastems, the machines were checked and the interface specifications were agreed on. This way, both parties knew how to prepare beforehand, ensuring a smooth integration with less on-site hours. It was also agreed to keep the interfacing at a basic level, i.e. to consist of NC-program selections including program starts/stops, status indications and safety features. More extensive interfacing – such as NC-program transfers, tools check, ERP connectivity etc – are planned to be taken into use once the machines have been renewed. From Fastems’ side the update will be very easy to implement.

In practice, Fastems built the FMS ONE on the other side of the old Makino FMS and then moved the a55s one by one into the new system. The fifth stand-alone a55 was also included to increase productivity. Delivering the project in this way enabled minimal production stops. With some buffers, KA’s production was able to run without any major disturbance. The whole project lasted around 9 months from order to factory acceptance, including the 3 weeks of installation onsite. 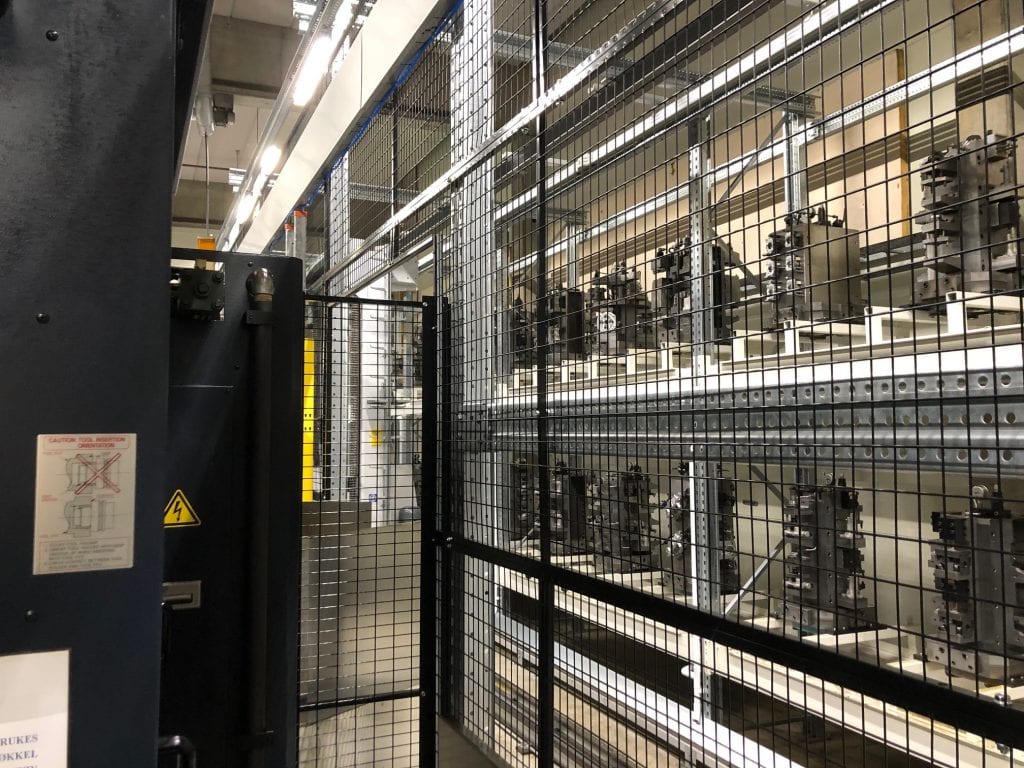 Pallets and fixture towers inside the Fastems FMS ONE

What was the outcome?

As mentioned, Håvard’s biggest concern was the potential breakdown of the old FMS. This is obviously not a worry anymore!

On the contrary, the output of the existing Makinos has actually increased by 15-20 % and the system runs virtually error-free.

Equally important, future changes were always kept in mind during the investment. The machine tools can be replaced one by one and integrated into the Fastems FMS ONE very easily. This will also mean modern interfacing, enabling the full potential of the FMS ONE to be reached in terms of production planning features enabled by a more extensive interface.

KA’s operators have been satisfied with the user-friendliness of Fastems’ MMS control software. Operated mostly via a large touch screen and with intuitive controls, the MMS is easy to use and is much like using everyday technology like a smartphone. The work ergonomics have also increased significantly because of better access to the pallets in the loading stations.

Fastems MMS stores information on workpieces, fixturing and pallets. This means that re-running parts is very easy and can be done in a couple of minutes and doesn’t require lengthy manual preparations. Today, all pallets and fixtures can be stored inside the system making work easier and more efficient. Unused pallet capacity also enables future growth.

Executive summary – what can we learn?

Throughout the years, Fastems has supplied a number of automation solutions for existing machine tools so the situation at KA wasn’t unique in that sense. Both Henrik and Håvard feel that manufacturers operating their current 4 or 5 axis milling machines should really look into automating them – or updating the current automation. The idea is probably something many have considered but few have actually started to implement – which we think is a pity! The suitability has to be evaluated case-by-case of course, but the teachings from KA show that these kinds of investments can: